Paul Van den Hof / About Me

Paul Van den Hof was born in 1957 in Maastricht, The Netherlands.
He received the M.Sc. and Ph.D. degrees both from the Department of Electrical Engineering, Eindhoven University of Technology, The Netherlands in 1982 and 1989, respectively. From 1986 to 1999 he was an assistant and associate professor in the Mechanical Engineering Systems and Control Group of Delft University of Technology (TUD), The Netherlands. From 1999 to 2003 he was a full professor in the Signals, Systems and Control Group of the Department of Applied Physics at Delft University of Technology. From 2003 to 2014 he was full professor and founding co-director (together with M. Verhaegen) of the Delft Center for Systems and Control (DCSC), with appointments at the Faculty of Mechanical, Maritime and Materials Engineering (3mE), and the Faculty of Applied Sciences. From 2004 to 2009 he was Department Head and Director of DCSC, and member of the management team of the Faculty 3mE of TUD. This role included the initiative for setting up an international MSc Programme Systems and Control.

Since 2012 he is full professor in the Control Systems Group, Department of Electrical Engineering of Eindhoven University of Technology, The Netherlands and he has been Chair of this group in the period 2012-2022. Paul Van den Hof’s research interests are in issues of system identification, parametrization, signal processing and model-based control design, with applications in industrial process control systems, including petroleum reservoir engineering systems, mechanical servo systems and physical measurement systems.

He teaches in the graduate program of the research school DISC, and has been a guest lecturer in the Belgian graduate school on Systems and Control (1997, 2003, 2011), and in the University of Campina Grande, Brasil (2004), and he has been guest researcher at The University of Newcastle, NSW, Australia (1992, 2007), and the University of California at San Diego (2011). He is an IFAC Fellow and Life Fellow of IEEE.  Read Paul’s complete biography. 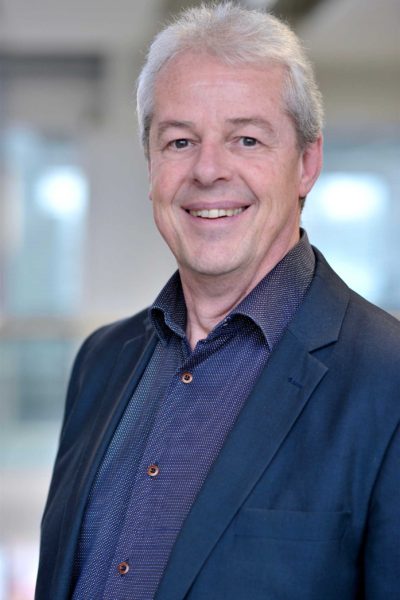 From 2005 until 2014 he was scientific director of the national research and graduate school “Dutch Institute of Systems and Control” (DISC), that is accredited by the Royal Netherlands Academy of Sciences, and that has obtained recognition and funding as a national Graduate Programme by the Netherlands Organization for Scientific Research (NWO) in 2010. In this capacity he was the national representative of the Netherlands NMO in IFAC.

He was General Chair of the 13th IFAC Symposium on System Identification, held in Rotterdam, the Netherlands in 2003, Editor of the Symposium Proceedings, and Guest-Editor of the Automatica Special Issue “Data-Based Modelling and System Identification”, March 2005. He was project coordinator of the EU funded project Autoprofit (Advanced Autonomous Model-Based Operation of Industrial Process Systems), 2010-2013.

He currently holds an ERC Advanced Research Grant on Data-Driven Modelling in Dynamic Networks (2016-2022). He is elected member of the Board of Governors of IEEE Control Systems Society (2022-2025), and member of the Scientific Board of the Eindhoven Aritificial Intelligence Systems Institute (EAISI).

Explore my research
To research